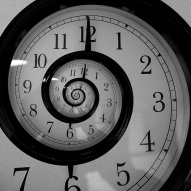 How long is that note?
Tell me the tempo you want,
That’s the way I’ll know.

How much time is left?
When will we reach the coda?
Carpe musicam.

I’ve been thinking about time a lot lately.  Probably because there are some important deadlines on my horizon, and the clock is ticking very loudly.  Also because it’s one of my children’s birthday, and how can they be that age already?

As we say in linguistics, “Time flies like an arrow; fruit flies like a banana” (and yes, there really is a Wikipedia entry for this).

In music, time can be a very fluid thing.  While a note has a fixed duration relative to other notes in a given piece of music, its absolute duration is quite malleable.

So how fast is allegro?  And exactly how much rubato can you get away with (they do call it “stealing time” after all) before people start to raise their eyebrows at you?

It’s fuzzy–except when it’s not.  I’m thinking of the famous disagreement between Glenn Gould and Leonard Bernstein on the tempi of a Brahms concerto.  Gould insisted on stunningly slow tempi for certain portions of the concerto, and Bernstein felt it necessary to make an announcement before the piece began to make the audience aware that this would be a…unique…interpretation.

Beethoven’s Grosse Fuge was deemed too vast to be the last movement of the Quartet in B-flat Major, Op. 130.  But some have recorded the quartet with the fugue, leaving it to the listener to make up their own mind.

But while it seems to extend endlessly, time can also be too short.  Monday’s featured artist, Jacqueline du Pré, was forced by illness to stop performing at age 27.  Schubert died at 31, having already produced over 600 songs, nine symphonies (and he had started a tenth).  What if he had lived to 80?  What would a Schubert who lived to the time of Brahms, Bruckner, San-Saëns, and Liszt write?

Alas, we will never know.

Minutes tick by, never to return.  You can blaze through Chopin’s Minute Waltz, sure, but after listening to many feats of pianistic wizardry, I have to go with Rubinstein’s less-blazing performance.  Each note is clear, distinct, and it becomes a small jewel.

So today, let us make the most of our notes, and make the best music we can, in any way that we can.  For there is but one certainty regarding time:

I am definitely going to be late to choir practice…again.

One thought on “Haiku Wednesday: Time”

This site uses Akismet to reduce spam. Learn how your comment data is processed.