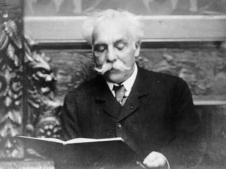 A requiem that dwells on
Eternal rest and light, peace,
Mercy and welcome.

Grace and elegance,
Music that soothes and comforts:
Gabriel Fauré.

He was drawn to music at an early age, and was sent to study at a music school in Paris, which in time was headed by Camille Saint-Saëns.  At first, Saint-Saëns was Fauré’s teacher, but the two became close friends.

After graduation, Fauré worked as a church organist…until he showed up one Sunday morning in his evening clothes after partying all night.  Thereafter, he became the organist at a different church.1

He fought in the Siege of Paris during the Franco-Prussian War and was awarded the Croix de Guerre. 1

After the war, he was choirmaster at Saint-Sulpice, where Charles-Marie Widor was organist.  The church had two organs, and the two would improvise together, trying to trick each other with unexpected key changes.  Saint-Saëns described Fauré as “a first-class organist when he wanted to be.” 1

As a professor at the Paris Conservatory, Fauré taught Maurice Ravel and Nadia Boulanger, among others.  He later became the school’s director, and modernized procedures and updated the curriculum to include works by Debussy and Wagner.  Old-timers were not amused by the inclusion of this newfangled music.  However, the group of contemporary composers known as Les Six adored him. 1

Fauré’s music spanned the period between Romanticism and 20th century music.  His later music hints at the changes that were occurring at the time, away from a fixed tonality and traditional chord progressions, and toward more amorphous harmonies.  His last work was his first string quartet, finished less than two months before he died. 1

An example of Fauré embracing the modern is now a great treasure.  He recorded a number of piano rolls, and through them, we can hear him playing his own music.  At the links you can hear Fauré play his Pavane (Op. 50), a Valse Caprise from Op. 38, a Valse Caprice from Op. 59, and Nocturne No. 7 (Op. 74).

I would be remiss to omit Fauré’s Requiem.  I could write an entire post on it—and I will, because I am currently learning to sing it.  But I need to immerse myself in it more first to be able to adequately describe it to you.  It is a towering work, a giant, but one that whispers.  A deeply emotional work, yet one that Fauré said that he wrote “for nothing—for fun, if I may say so!”2   The Requiem departs from the traditional requiem text, and focuses on eternal rest and perpetual light.  In a way, it is reminiscent of the Brahms German Requiem in its comforting tone.   It is beautiful, and I look forward to singing it and telling you more about it soon.

It is hard to know what to highlight, there are so many works I could present for you.  I’ll pick two.  First, his lovely song Aprés Un Rêve, sung here by Pumeza Matshikiza with pianist Simon Lepper.

And, for now, I leave you with Fauré’s Cantique de Jean Racine (Op. 11) for orchestra and choir.  Fauré wrote this when he was 19 years old, and it took first prize in a composition competition (imagine his competitors!).

This site uses Akismet to reduce spam. Learn how your comment data is processed.