I’ve begun working on the From Ink to Sound course from the University of Basel.  If you are interested in ancient manuscripts and exploring the evolution of musical notation you will find this course fascinating.

I decided to try my hand at some neumes yesterday, and there’s one thing I can say.

Neumes are small squiggles (this seems to be the most commonly used term for them in English) above text meant to be used as religious music.  The neumes give an indication of how the melody line is supposed to rise and fall.  But they are completely relative; there is no music staff to anchor the notes to a particular pitch.  Sort of like typing “123 Main Street” into Google Maps.  Useful, but insufficient information.

But to be fair, the neumes were never intended for learning a piece of music you had never seen before.  They were a mnemonic device for people who had already memorized (or were in the process of memorizing) the vast quantity of music associated with religious services of the time.  It’s the graphical equivalent of “How does this one go again?”

Here is a quick table of what neumes look like and what they mean.  This is only a few of the ways neumes are written.  There were regional differences in the manuscripts. Click on image to enlarge.

Here’s my not-entirely-faithful attempt to reproduce a manuscript with neumes that was presented in the course.  I am not ready for the scriptorium yet. I did not use a quill here, these are calligraphy pens.  Though I know of a farm in the area, I couldn’t bring myself to wander in asking for fallen feathers to write neumes.

You can explore the original codex here.  Click the manuscript, and in the drop-down box that says Front Cover go to page 44 to see the original page.  Or you can see it in the video linked below.

Here’s what it sounds like (funky medieval hand, but where’s the thumb?)

The introitus Sacerdotes Tui is performed by the Ensemble Gilles Binchois under the direction of Dominique Vellard.  The ensemble sings after the manuscript Einsiedln, Stiftsbibliothek, Cod. 121, p. 44. 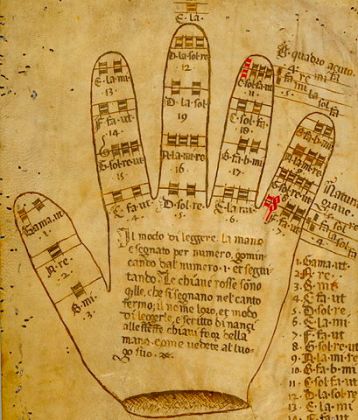 When I first heard the phrase “Guidonian Hand” it sounded to me like something from a cheezy horror movie; in fact, from the 1963 sci-fi movie The Crawling Hand (the guys at Mystery Science Theater 3000 did a wonderful, punny send-up of this movie).

But in fact the Guidonian Hand is the invention of the man who brought us the precursor of today’s music notation, Guido of Arezzo (991-after 1033).  It was a method of reminding beginning singers which note to sing.  Scales of notes are mapped to the joints and tips of the fingers.  The choirmaster would point to the appropriate point on the hand and the students would sing the note (one hopes).  You start at the tip of the thumb on ut (there was no do in the do-re-mi then), work your way down the thumb, then across from index finger to pinky, then up one joint, across to the index, up one joint, etc.  As a choir singer, I’m glad we’ve moved past this!

And speaking of old notations, there’s news on the history of the notation of polyphony!  I know, exciting, right?!  Prepare to geek out:  researcher Giovanni Varelli was cataloging instances of music notation in the British Library’s holdings of ancient manuscripts when he came across this page with music notated using neumes (those are the squiggles above the words).

That wasn’t the big discovery though.  Just above it was an illustration with vertical lines with dots on the bottom and lines on the top.

It turns out to be the same music.  The lines match the melody, and the dots indicate a harmonization of the melody.  If you look to the left you can see, written vertically the letters a through g, a dead giveaway that it’s music (once you get to g you wrap around to a again).  This pushes the use of polyphony notation back to the year 900!  You can read the whole story here. The music notated on the page can be heard here.

Not old enough for you?  How about this:  we used to think the music of ancient Greece was lost.  Instruments have been found, but without notation, there’s no way to know how a tune goes (we can’t say, “Hey, Homer, hum a few bars for me”).  But researcher Armand D’Angour has found evidence of musical notation inscribed as letters over the words of songs in Greek stone inscriptions and Egyptian papyrus dating from 450 BCE to 300 CE.  He has linked it to mathematical ratios of musical intervals.  You can read the story here.

Classicist David Creese has brought back to life one of these tunes found on a Greek column. The tune was composed by Seikilos.  Here’s what it sounded like (audio file copyright BBC).

A Guidonian Hand, a haunting tune brought back to life, mysterious notations…maybe I wasn’t so far off with the sci-fi reference after all.