Today in the United States we are celebrating Presidents’ Day.  President Abraham Lincoln’s birthday is 12 February and President George Washington’s birthday is 22 February.  The Monday between the two is designated as a federal holiday.

It got me to thinking, “What would George Washington have listened to?”  And from there I discovered some interesting facts about America’s founding fathers.

George Washington said in a letter to a composer who had sent him some music that he could “neither sing one of the songs, nor raise a single note of any instrument.”1   But while George couldn’t play music himself, he considered it very important.  So important that he ordered the army’s fife and drum musicians to shape up and practice or be demoted and receive a cut in pay!2

His wife Martha, her children, and grandchildren, however, all studied music.  There was a harpsichord at Washington’s home, Mount Vernon.3   Among the music to be found there was an arrangement of a Haydn symphony, an arrangement of the overture of Gluck’s opera Iphigenia at Aulis, an excerpt of Handel’s Water Music, and some sonatas by J. C. Bach.4

President Thomas Jefferson played violin and cello, and purchased a pianoforte for his wife during their engagement.  Apparently, before the engagement, rival suitors gave up and left after overhearing a duet between Jefferson on his violin and his beloved on the harpsichord as they sang together.  Jefferson enjoyed the works of Haydn, as well as Italian, French, and Scottish music, and several observers noted that Jefferson was always singing or humming a tune.  Jefferson said that music “is the favorite passion of my soul.”  Unfortunately, he continued, “fortune has cast my lot in a country where it is in a state of deplorable barbarism.”5  Oh dear!

Although he was not a president, founder Benjamin Franklin must be noted for his wide-ranging musical talents.  He played viola da gamba,6 harp, violin, and guitar.7  He may have composed music. He also invented an improvement on the playing of the rims of water-filled glasses, the armonica, or glass harmonica, for which Mozart and Beethoven composed music.  Here is Mozart’s Adagio for Glass Harmonica.

However, it must be noted that Franklin was not a great fan of Handel’s Judas Maccabaeus.  After seeing a performance in London, in a letter to his brother Franklin accused Handel of, among other things, putting the accents in the wrong places and “screaming without cause.”8  Don’t pull any punches there, Ben!  You can see the text of Franklin’s diatribe here (scroll down to images, “Franklin’s letter to his brother”).

President Abraham Lincoln, while not a musician himself, took great pleasure in attending concerts (especially operas) and hearing bands and singers perform.  See a lengthy article on Lincoln and his tastes in music here.  Lincoln attended a performance of Mozart’s Magic Flute in 1865, and was a fan of the music of American composer Louis Moreau Gottschalk9 (here is Gottschalk’s composition The Union (Fantasy on Patriotic Airs).

Visit the following link for a look into music and musical performances at the White House.

George Washington with headphones via https://joeyandkiki.wordpress.com/tag/boombox/

Lincoln with boombox via http://1funny.com/lincoln-boom-box/ 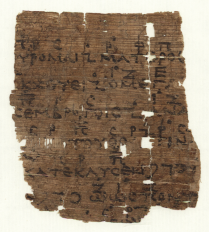 This is a fragment of the play Orestes, written by Euripides (c 480-406 BCE).  The fragment is thought to have been written around 200 BCE.  It is the text of the first chorus (verses 338-344 for the classicists out there).  The marks above the text are musical notations.  For more on the fragment, see the World Digital Library page for this item.

Ok, everybody, all together now:

[Chorus
O Zeus! What pity, what deadly struggle is here, [335] hurrying you on, the wretch on whom some avenging fiend is heaping tears upon tears, bringing to the house your mother’s blood, which drives you raving mad? [340] Great prosperity is not secure among mortals. I lament, I lament! But some divine power, shaking it to and fro like the sail of a swift ship, plunges it deep in the waves of grievous affliction, violent and deadly as the waves of the sea. [345] For what other family must I still revere, rather than the one from a divine marriage, from Tantalus.]

Sound like opera?  You’re right:  the story has been turned into an opera by Handel (who used the story as told by Euripides), Sergeiy Taneyev (NY Times article on it here) and Iannis Xenakis (both of whom used the version of the story told by Aeschylus).

Here’s is an aria from Handel’s Oreste.