I was driving through the countryside the other day, and saw some cows grazing in a field.  I was reminded of Edvard Grieg’s Cattle Call, a solo piano piece I had played a long time ago.  Grieg has always been a favorite of mine.  I particularly enjoy the little vignettes he creates in his solo piano miniatures, in particular, his Lyric Pieces.

When I went to look it up again, I remembered that there was more than one Cattle Call.  There are four pieces known as Cattle Call, or Cow Call, or Cow Keeper’s Tune.  Op. 17 No. 22 and Op. 66 No. 1 were written for solo piano.  Op. 63 No. 2, which expands on the first Cattle Call, was written for a string ensemble.  And there is a song called Cow Call from Op. 67.

Each of them evokes a peaceful, bucolic, restful end-of-the-day feeling.  This is music to make you say ahhhh.  I think we all could use that sometimes.

Here are some lovely performances of Grieg’s Cattle Call pieces.

(It would seem from these videos that cows also enjoy moosic, in these cases, the cello and harp)

A footnote for musical completeness (‘cause that’s how I roll).  The Cow Call from Op. 67 is not part of the published Op. 67.  Grieg set a number of poems from Arne Garborg’s poem cycle Haugtussa.  The published music includes eight songs.  But Grieg wrote 12 others that were not included (these are designated EG 152), including Cow Call.  Information from https://imslp.org/wiki/Haugtussa%2C_Op.67_(Grieg%2C_Edvard).

Here and there upon
The trees, many colored leaves
Remain, and often,

I stand there and think.
I spy one leaf, and upon
It, I hang my hopes.

The wind stirs the leaf.
I shake. If it falls, I’ll fall,
And weep for lost hope.

The haiku above is a rendering of the words of Wilhelm Müller’s poem Letzte Hoffnung [Last Hope], which was set to music by Franz Schubert as part of his Winterreise song cycle.  Here is Letzte Hoffnung, performed by tenor Jonas Kaufmann and pianist Helmut Deutsch.

The painting that is the background in the YouTube video is Abandoned by Jakub Schikaneder.  He was known for his paintings of lonely figures–a perfect choice for Winterreise.

I haven’t been posting much lately because it has been a busy choir season.  Recently, we had the privilege of singing at an open-air event.  It was wonderful, with several choirs and soloists performing, fine speakers, overall, a truly memorable event.

However, there were certain aspects of open-air singing that I was not prepared for, so, as a public service, I thought I would alert you to some of the hazards that you might have to confront, and provide you with some helpful tips.

The venue in which we were performing had a roof, but all four sides were open.  The sun, which at first was a pleasant, cheerful presence, over time became the blindingly bright, searing ball of flame that it is.  The highly reflective white music pages became hard to see, a situation made worse by burning, salty sweat dripping inevitably into the eyes.  It would have looked weird to don sunglasses, even if we had them, so that was not an option.  Or, for that matter, a sweatband, never elegant under any circumstances.  In addition to the threat of heatstroke, some of us were treated to the musical equivalent of a trucker’s tan.  I’ll call it a tenor’s tan, the sunward arm bronzed from the tip of one’s short sleeve to the wrist, the hand remaining ghostly due to its sheltered position beneath the music binder.

Note: bring water.  Long sleeves, while counterintuitive in hot weather, are not necessarily a bad thing, and are useful for mopping the sweat out of one’s eyes.

Thankfully, no one inhaled a bug while prepping for a dramatic forte note.  I’m sure it has happened.  Instead, we were visited by the occasional wandering insect of the stinging variety.  On-stage decorum precluded frantic arm waving (or running away, or wildly swinging one’s music binder).  Instead, I mentally intoned the mantra I typically use when encountering snakes while hiking, “I’m a tree, I’m a tree…”, hoping they’ll somehow get the message that I am not something to bite.

Note: forget bug spray; singers would rather inhale a bug than smell that all afternoon.  Be brave.

We were seated (thankfully) on risers, standing when it was our turn to perform.  But there were no railings behind the back row.  There was a fear that some poor bass would fall off, into the deep end you might say.  A basso profundo indeed.  I am happy to report there were no incidents.

Note: be aware of your surroundings at all times.  Especially edges.

When you sing inside, you always have some sort of reflection of your sound, either from a wall behind you, or across from you, and it helps to evaluate your sound in comparison to others.  But outside, with no walls, the sound escapes from your lips…and keeps going.  You might be able to hear the person next to you, maybe the person behind you, but, if you’re toward the back, everything in front of you is inaudible.  Typically, a monitoring speaker is placed facing a choir so they can hear themselves, but this was not the case this day, or if it was, it was so quiet we couldn’t hear it.  More frighteningly, we could not hear our pianist, which meant watching the conductor was no longer optional (note: conductors will tell you it is never optional).  Probably ok, since it was pointless to look down at the music, because we couldn’t see it in the blinding sun anyway.

Note: keep time, read lips when necessary.  And do no harm (drop out if you’re not sure, come back in when you’ve found your place).

I’d like to point you toward a video at this point, or at least audio, but apparently there was a recording problem, and the sound that was captured from anyone who was not wearing a mike (i.e., the choirs) was a weak, feeble whisper not at all representative of what was being produced or transmitted to the live audience.  I think the bees clustering on a microphone would have made a louder sound, though I suspect it would be less four-part harmony, and more George Crumb’s Black Angels.

So, I hope this will help you get ready should you have the opportunity to sing outside.  Be prepared as well for:  thunderstorms, darkness, cold weather, high winds, dust blown by said high winds, audio feedback of the ear-piercing variety, earthquakes…you get the idea.

Just remember to have fun! 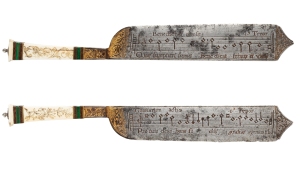 A slice of life from Renaissance Italy has been preserved in the form of knives with musical notation.  These rare knives, dating from about 1550, can be found in the collections of the Fitzwilliam Museum in Cambridge, England, the Victoria and Albert Museum in London, the Philadelphia Museum of Art, and in a few other locations.  For a detailed picture of a complete set, see this article from the WQXR blog.

Each knife contains the vocal line for one male voice (superius, contratenor, tenor, bassus).  One side of the blade displays a benediction, and the other, grace to be sung at the table.  You can hear (and download) recordings of the beautiful polyphonic music on the knives from this webpage of the Victoria and Albert Museum.

If you’re thinking, “they don’t make things like that anymore,”

you’re almost right.  One artisan has created a beautiful modern reproduction that you can see at the link. 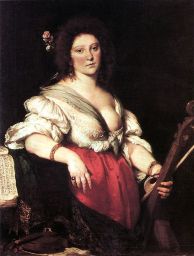 Barbara Strozzi
A beautiful singer and
A fine composer.

She had four children,
Never married, and published
Books of her own songs.

Barbara Strozzi (1619-1677) was a remarkable composer and singer who lived in the golden age of Venice.  She wrote an abundant amount of music, and had it published in her own lifetime.  And her publications contained only her compositions.  Typically, the works of female composers were included in musical anthologies with male composers.  Barbara Strozzi’s publications were all her own.

She was the daughter of Isabella Garzoni, a servant of Giulio Strozzi, a poet and librettist.  Strozzi, who may have been her biological father, adopted her, and encouraged her musical education.  Barbara studied with composer Francesco Cavalli.

That her father encouraged her musical education would have been remarkable enough.  But when he later formed a circle of musicians, Barbara regularly attended, and frequently sang at these gatherings.  She was praised for her musical ability, and some of the members dedicated works to her.  She began composing by setting her father’s poems to music, but soon began writing her own poetry for her music.

Barbara Strozzi’s independent streak made her a magnet for slander in her time.  She bore four children, but never married.  It is believed that the father of most, if not all, of the children was Giovanni Paolo Vidman, a patron of music and a member of the circle of musicians that Barbara’s father founded.

Barbara Strozzi was a financially secure woman.  Venetian records indicate that she was a smart investor, and had enough resources to make loans—including to Giovanni Vidman.  Independent indeed.

But let’s get to the music.  You can find sheet music for some of her compositions here.

Here’s a lovely song, Voi pur begl’occhi, sete, which begins “Beautiful eyes, you are indeed a door to paradise”

And here is the haunting Lagrime mie.  The opening words are “My tears, why will you not fall and quench the fiery pain that takes away my breath and crushes my heart?”  Wow.

You can find many fine recordings of the works of Barbara Strozzi at your favorite music streaming site or vendor.  Check them out!

Biography of Barbara Strozzi from a blog dedicated to her life and works, http://barbarastrozzi.blogspot.com/2008/06/history-barbara-strozzi-composer-1619.html

Wouldn’t it be cool to have a live concert in your office?

Snow fell on my hair
Making it a shiny white.
I thought I’d turned gray.

And I was happy
To be close to journey’s end;
But it did not last,

For soon the snow thawed.
My black hair made me despair.
How far must I go?

From night until dawn
Many a head will turn gray,
But, sadly, not mine.

The above haiku is a paraphrase of Wilhelm Müller’s poem Der Greise Kopf, set to music by Franz Schubert.  It is part of Schubert’s epic song cycle Winterreise.  The song immediately precedes The Crow, previously described here.  The wanderer, having left his lover and the comforts of home, wanders through an inhospitable winter landscape. Here he seems to find the coating of snow making his hair gray ironic; he wishes he were old, and that his journey, that is, his wandering and his life, were closer to an end.  For him, bitterly, it is not to be.

I realized I forgot to tell you how the website got its name.  Let’s fix that.

I was talking with someone about music, and they said, “You know, it seemed like you were only casually interested, and bam! suddenly Schubert.  It’s like you catapulted into classical music.”

I liked the image, it fit me.  It’s not uncharacteristic for me to become interested in something and become rather absorbed in it.  My approach is enthusiastic, but not always systematic.  There can be a slightly-out-of-control element to it, just like a catapult.  And while I have an idea of where I want to go, I’m never quite sure which path I’ll take, or where I’ll end up.  Ah, but getting there is wonderful!  Which leads me to my Throwback Thursday Quote of the Week, up next.

Oh, and the music over the careening stick figure is the first vocal line from Schubert’s Winterreise.