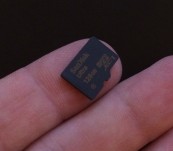 The picture above shows a micro SD card on my fingertip.  It is the size of the fingernail of my smallest finger.

It holds my entire digitized music library, classical and pop, with room to spare.  This is a 128 gigabyte card, but these cards also come in the “supersized” 256 gigabyte variety (and higher), also the size of a fingernail.

You can install a card like this in a smartphone (except iPhones) or tablet.  I was going to say “easily install” but they are tiny and easy to fumble, not to mention the fact that the slots into which they are installed are frequently spring-loaded.  Which means, if you don’t click it in completely, your device may shoot the card across the room like a watermelon seed (about the same size and color).  I strongly suggest installation in an obstacle-free environment, preferably with a light-colored floor.  With an adapter, you can also plug it into the USB port of a computer, DVD player, or television.

I’m currently pairing this card with a FiiO X1 portable MP3 player, which is about the size of a deck of cards.  I chose it because at the time it was one of the only players that handled the FLAC format (a lossless form of MP3—if this terminology is unfamiliar to you, you might want to take a look at my post on digital music formats).  It also can transmit music wirelessly via Bluetooth or be plugged directly into a stereo receiver as an audio input.  It can accommodate a micro SD card of up to 256 gigabytes.

This all means that I can walk around with a representative sample of 1000 years of music in my pocket and play it even when there is no internet connection or electricity (at least until the battery runs out; solar rechargers exist though).

I can’t help but find this amazing.  My mother had a Steelman blonde-wood console stereo record player (to which you could also connect other devices—revolutionary!) that, with the speakers, was slightly smaller than a Fiat 500.  It did make a mighty sound though–I’ve written about it before.

But to make music, you also needed vinyl records, which took up a sizeable amount of shelf space.  My computer’s music library currently contains something like 1000 albums from physical CDs, LPs, or born digital files.  This would, I estimate, require about 15 linear feet of shelving for vinyl.  Oddly, the width of a standard CD case is equivalent to 2 LPs, so they would actually take up more linear feet; but due to their shorter height, they can be arranged more densely.

All of this now fits on a fingernail.  This blows my mind.

I can’t conclude without some music for you.  So, I think I’ll reach way back into the archives, and give you music that I carry around on my little card.  Here is the Kyrie from Guillaume de Machaut’s Messe de Notre Dame, written before 1365.

Many generous musicians around the world are making their performances available so that more people can have access to and enjoy classical music. They are doing this through Creative Commons licensing of performances of materials in the public domain.

Here are my latest discoveries.

Here is the opening paragraph of the https://www.hdclassicalmusic.com/ website:

Here at HDCLASSICALMUSIC.COM, we believe that classical music is the common heritage of humanity, and therefore everyone in the world should be able to enjoy it and use it for free. In order to achieve this, we are building the world’s largest and highest quality platform for releasing classical music under an open copyright license (public domain, creative commons, etc.).2

I can’t improve on that wording.  Here is the composers index, You can play the track online as well as download it.

They also offer playlists and a radio option.  You can also build your own CDs.  The quality is wonderful.  Listen here to a performance of “Mélodie” from Tchaikovsky’s Memory of  a Dear Place (Op. 42, 3rd Movement).

And then there’s MusOpen (https://musopen.org/)

Musopen is…focused on increasing access to music by creating free resources and educational materials.  We provide recordings, sheet music, and textbooks to the public for free, without copyright restrictions.  Put simply, our mission is to set music free.3

I found this entry for Bach’s Sonata No. 2 in D major (BWV 1028) featuring viola da gamba and harpsichord.  On this page, you can listen to the track, download the recording, and download the sheet music.

[In a previous edition, this post contained information about the Classic Cat website.  Upon review, after receiving a comment from a reader and revisiting the site, I have decided to remove it from this post.  While one can find links there to music websites, one has to navigate among numerous ads, pages, and buttons to get to that information.  Hitting the wrong button might take the user to somewhere they did not intend to go.]

And let’s not forget Wikipedia.  You may have noticed that an entry for a composer might have a link to a sound file so you can hear a representative piece of music.  There is a master list.  Go to https://en.wikipedia.org/wiki/Wikipedia:Sound/list and you’ll find links to alphabetical index pages where you can find the composer and the pieces that are available for that composer.  You can play or download the files.

Piano fans:  Lisztonian.com provides free recordings that the performer has made available for you to listen to online or download, as well as links to download the sheet music.  Here’s the composers list.

Now available in the Digital Audio Guide tab is Drinking from the Firehose: Giant Music Libraries at Home and Online.  This page will give you background information on what’s involved in turning your physical musical media (CDs and LPs) into audio files on your computer.  It will also provide a quick overview of on-demand streaming services.  I hope you’ll check it out.

Speaking of streaming services, Primephonic has inaugurated its new streaming service specializing in classical music.  You can stream in MP3 or FLAC format.  They are offering a 30-day free trial.  Here is the link for the signup.

I’ve just published a new page in the Guide to Digital Audio.  This one is called ALAC and Alas! Which Digital Audio Format Should I Pick?  Here you’ll be able to learn about the differences between WAV and mp3, FLAC and ALAC, and what the heck Ogg Vorbis is.  You’ll find an overview of audio file formats, and, if you’re digitizing your music collection of LPs and CDs, help to figure out which format is right for you.

Coming soon will be an overview of music streaming services and more on digitizing huge music libraries.

Not keen on all the flap about FLAC?  I have some music for you, and something that will tie in nicely with the post on digital audio.  Here is Steve Reich’s Electric Counterpoint: III. Fast.

Got a buck?  Amazon has a bargain for you.

In its digital music section, Amazon has a wide variety of classical mp3 collections.  There is a group that generally goes under the name “Big [fill in the blank] Box.”  Typically they are digital forms of Bach Guild or Vox recordings, gathered together in virtual box sets.  The offerings change, but typically there are a number available for a whopping $0.99.  That’s right, ninety-nine of your finest American cents.

And they are a deal.

Are they all going to be performances by premier artists?  Not necessarily (although Alfred Brendel and Lorraine Hunt Lieberson have been among the artists I’ve seen, among others).  Are they the definitive performances of the work?  Probably not–but once you figure out what the definitive performances are (or your favorites) you can get them on Amazon (or Ebay, or Classical Archives, or ArkivMusic, or your favorite venue).  But you have to start somewhere.  And 99 cents is a pretty good way to start.

You’ll probably have to install the Amazon music player (a painless process), but it’s compact  (doesn’t take up a lot of space on your computer) and easy to use.  You’re not required to use it though, the files are in standard mp3 format.  If you’re an iTunes user, Amazon can automatically download your music to iTunes.  All your purchases are also automatically stored in the Amazon cloud, free, accessible on any device that supports the app.  You can also import your personal music library, but there is a fee.

Curious about Haydn, Telemann, Debussy, or Mahler? There’s a box for you.  Flute, violin, guitar? Step right up.  Baroque?  Several boxes are available.

Want something a little more lightweight, yet still classical (since 13 hours of Mahler might be a bit much)?  The “100 must-have [fill in the blank] classics” series is there to provide a classical soundtrack to your day or your next dinner party (the horror classics is probably not a good idea though).  Tell your friends who are not classical fans, they might just get interested.

And then, if you wouldn’t mind, send them over here.  Thanks!